As I mentioned earlier, the launch of the Radeon RX 5600 XT is turning into quite a competitive event between AMD and NVIDIA. After initially announcing the card two weeks ago, we’ve seen NVIDIA start to cut prices on the RTX 2060. And that seemingly has elicited a reaction-reaction from AMD as well.

Midday Wednesday, less than a day after AMD made the drivers available to the press, the company sent word that they would be sending out new BIOSes for the cards they had sampled, Sapphire’s Pulse Radeon RX 5600 XT. And sure enough, on Thursday morning new BIOSes arrived, which had a rather material impact on testing results.

I’ll get to the content of the BIOSes themselves in a second, but even before we go that far, I want to note how unusual it is to receive last-minute BIOS changes. For brand-new architecture launches this isn’t unheard of, especially to fix last-minute bugs. But for GPUs that have been out for months – and for cards that are already on the way to retailers – last minute BIOSes are almost never necessary. So when it does happen, it generally means that a vendor is making some last-minute adjustments for competitive reasons, and that’s exactly what’s happening here.

Indeed, if we take a look at the voltage-frequency curves on the Pulse RX 5600 XT’s quiet mode BIOS, we see the following. 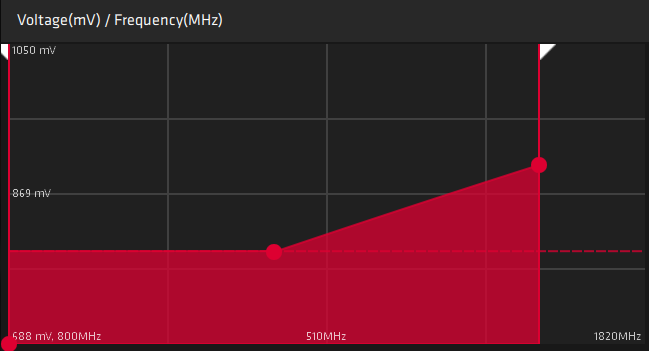 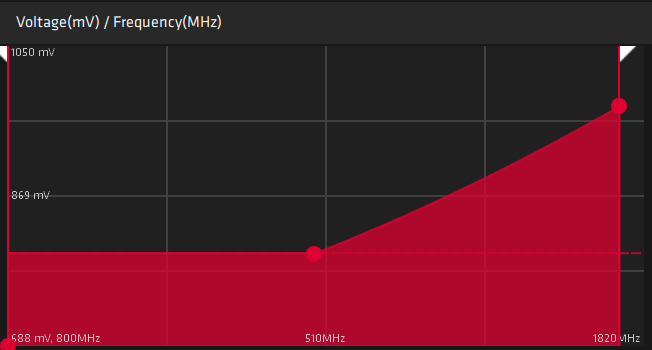 While the display in AMD’s drivers is a bit rough, we can clearly see that AMD/Sapphire has extended the curve, allowing the card to boost to higher clockspeeds at a higher voltage. And the situation is pretty much the same for the performance BIOS as well, with a similar extension of the voltage-frequency curve.

Now, to be sure, AMD has not changed the reference specifications for the Radeon RX 5600 XT. So despite what’s going on, the baseline hasn’t changed. Case in point: the Pulse 5600 XT’s quiet mode BIOS has the same 135W TGP (~150W TBP) power limit both with the old and new BIOS, as well as the same 1460MHz rated game clock. And indeed, adding a bit more to the end of the voltage frequency curve generally doesn’t do much for the card, as higher frequencies are quite expensive from a power standpoint, and the card is generally bottlenecked elsewhere.

Furthermore it’s not clear right now whether similar BIOS updates are going to be issued for lower-end cards. The Sapphire Pulse is a (or at least was a) mildly factory overclocked card, with overbuilt cooling and power delivery. So AMD and its partners may not even want to issue a BIOS update to baseline models, where power and thermals would be more restricted.

That said, this entire update situation gives me the distinct impression that AMD’s plans for the RX 5600 XT changed in the last two weeks. The company was seemingly originally intending on giving the card a relatively low frequency cap, which would improve overall energy efficiency by lowering average power consumption, (still) easily beat the GTX 1660 series, and keep the RX 5600 XT from encroaching on the RX 5700. Instead, the frequency cap has been lifted, which gives the quiet-mode Pulse RX 5600 XT the slightest of performance bumps.

Unlike quiet mode, however, AMD and Sapphire’s BIOS changes are far more significant for the card’s performance mode, which is its default and full factory overclocked mode. Not only has the updated BIOS extended the frequency cap, but it has also increased the card’s power limits, leading to Sapphire adjusting the rated game clock from 1560MHz to 1650MHz. Finally, as the GPU clockspeed improvements on their own aren’t especially potent, the companies have raised the raised the memory clock as well. As a result, the Sapphire Pulse RX 5600 XT is a good bit faster now than it was 5 days ago.

As a quick reminder, AMD tends to throw around both Total Board Power and Total Graphics Power. The latter is the value reported by their drivers and only measures the GPU power. TBP includes the memory and everything else

As a factory overclocked card, the Pulse 5600 XT was already shipping with a slightly goosed clockspeed and TBP, making it a 160W card in its default performance mode. The new BIOS has pushed that further north, giving it a TBP of around 180W, or around the same TBP has the Radeon 5700.

More significant than that, however, is that AMD and Sapphire have also increased the memory clock from 12Gbps to 14Gbps. This is very important, because by its very design, the RX 5600 XT’s biggest bottleneck is memory bandwidth – it has the RX 5700’s GPU throughput, but ~35% less bandwidth – meaning that increasing the memory clock delivers a major boost to the RX 5600 XT’s performance. 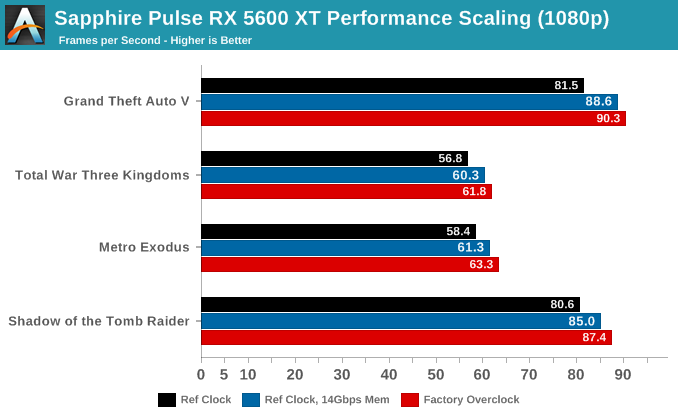 The bulk of the performance uplift we see comes from the memory clock increases, not the power limit + clockspeed increases. This underscores the importance of memory bandwidth to this part, and furthermore the significance of this last-minute BIOS change.

The net impact of this change is that the performance delta between a reference-clocked RX 5600 XT and the factory overclocked cards that AMD is sampling to the press is quite significant. In its full factory overclocked mode, the Pulse RX 5600 XT ends up being 8% faster than a reference clocked card, which is far from the largest factory overclocks we’ve ever seen, but larger than the kind of modest overclocks that Pulse cards normally see. It’s also not too far away from the kind of performance delta that separates entire tiers of cards; if it were a 10% boost AMD could call it an RX 5600 XTX and it would fit right in to normal video card product stacks.

The big question, of course, is why AMD and Sapphire decided to make such a last-minute change. To answer that, I’ll start with AMD’s official line:

Based on ongoing testing with our board partners, we have raised the GPU core and memory frequencies for overclocked Radeon RX 5600 XT SKUs to take advantage of increased thermal and electrical headroom built into partner’s custom designs. The updated VBIOS has been made available to our board partners for inclusion in select OC SKUs at launch. AMD is dedicated to disrupting the market with industry-leading compute products, and the new VBIOS makes the Radeon RX 5600 XT an even more powerful contender for high-performance 1080p gaming. Previously announced product specs are unchanged, as they remain AMD’s recommended reference design specs.

Meanwhile, I suspect AMD’s motive may be a bit more straightforward: beating the now-$299 RTX 2060. As it so happens, the factory overclocked Sapphire Pulse RX 5600 XT pulls ahead of NVIDIA’s reference RTX 2060 by 2% – which is essentially a wash in benchmark terms – but it allows AMD and its board partners to weave RTX 2060 performance into their product messaging. If AMD can position the RX 5600 XT as an RTX 2060 competitor rather than a GTX 1660 Ti competitor, then it’s all the better for them.

Meanwhile, although Bill of Material (BOM) costs are a matter for the board partners rather than something for consumers to be concerned about, I suspect these factory overclocked SKUs are going to wipe out most of the BOM gains from the RX 5600 XT SKU. 14Gbps memory, better PCBs, higher capacity VRMs, and better cooling all run counter to the cost-cutting that the RX 5600 XT would otherwise allow. And as we’ll see in our benchmark results, it also wipes out most of the energy efficiency gains. So AMD is once more trading off higher power consumption for better overall performance.

All told, it reminds me a bit of the Radeon R9 290 and the GTX 460; both cards used last minute tweaks and factory overclocks to try to close a performance gap with the next tier. These kinds of actions certainly make a mess of consumer messaging, but as we’ve seen before, they can be quite effective in very close fights.