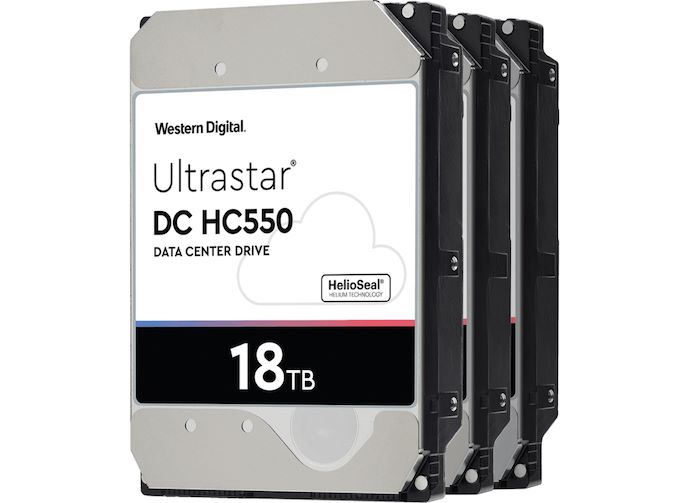 Marking an important step in the development of next-generation hard drive technology, Western Digital has formally announced the company’s first hard drives based on energy-assisted magnetic recording. Starting things off with capacities of 16 TB and 18 TB, the Ultrastar DC HC550 HDDs are designed to offer consistent performance at the highest (non-SMR) capacities yet. And, with commercial sales expected to start in 2020, WD is now in a position to become the first vendor in the industry to ship a next-generation EAMR hard drive.

Since we are dealing with a brand-new platform, the Ultrastar DC HC550 also includes several other innovations, such as a new mechanical design. Being enterprise hard drives, the new platform features a top and bottom attached motor (with a 7200 RPM spindle speed), top and bottom attached disk clamps, RVFF sensors, humidity sensors, and other ways to boost reliability and ensure consistent performance. Like other datacenter-grade hard drives, the Ultrastar DC HC550 HDDs are rated for a 550 TB/annual workload, a 2.5 million hours MTBF, and are covered by a five-year limited warranty.

The research and development efforts of the hard drive manufacturers to produce ever-denser storage technology has been well documented. Western Digital, Seagate, and others have been looking at technologies based around temporarily altering the coercivity of the recording media, which is accomplished by applying (additional) energy to a platter while writing. The end result of these efforts has been the development of techniques such as heating the platters (HAMR) or using microwaves on them (MAMR), both of which allow a hard drive head to write smaller sectors. With their similar-yet-different underpinnings, this has lead to the catch-all term Energy-Assissted Magnetic Recording (EAMR) to describe these techniques.

Being a large corporation, Western Digital does not put all of its eggs into one basket, and as a result has been researching several EAMR technologies. This includes HAMR, MAMR, bit-patterned media (BPM), heated-dot magnetic recording (HDMR, BPM+HAMR) and even more advanced technologies.

At some point in 2017, the company seemed to settle on MAMR, announcing a plan to produce MAMR-based HDDs for high-capacity applications. Still, while the company focused on MAMR and, presumably for competitive reasons was publicly downplaying HAMR for a while, WD did not really stop investing in it.

Ultimately, having designed at least two EAMR technologies, Western Digital can now use either of them. Unfortunately, for those competitive (and to some degree political) reasons as before, the manufacturer also doesn't really want to disclose which of those technologies it's using. So while the new Ultrastar DC HC550 HDDs are using some form of an EAMR technology, WD isn't saying whether it's HAMR or MAMR.

As things stand, the only thing that the company has said on the matter is telling ComputerBase.de that the new drivers do not use a spin-torque oscillator, which is a key element of Western Digital's MAMR technology.

Here is an official statement from Western Digital:

“The 18 TB Ultrastar DC HC550 is the first HDD in the industry using energy assisted recording technology. As part of our MAMR development, we have discovered a variety of energy assisted techniques that boost areal density. For competitive reasons, we are not disclosing specific details about which energy assist technologies are used in each drive.”

With MAMR apparently eliminated, it would seem that WD is using a form of HAMR for the new drives. However at least for the time being, it's not something the company is willing to disclose.

Ultimately, whether HAMR or MAMR, the end result is that WD's EAMR tech has allowed them to increase their drive platter density and resulting drive capacities. Density improvements are always particularly welcome, as it should allow the HC550 to offer higher sequential performance than existing 7200 RPM hard drives. However, since the new storage devices feature a single actuator that enables around 80 IOPS random reads, IOPS-per-TB performance of the new units will be lower when compared to currently available high-capacity 10 – 14 TB HDDs (think 4 IOPS-per-TB vs. 5.7 – 8 IOPS-per-TB) and will require operators of large datacenters to tune their hardware and software to guarantee their customers appropriate QoS.

Unlike Westen Digital’s flagship 20 TB shingled magnetic recording (SMR) hard drive for cold storage applications, the company’s 16 TB and 18 TB nearly HDDs use energy-assisted conventional magnetic recording (CMR), which ensures predictable performance both for random read and write operations. As a result, while the Ultrastar DC 650 SMR HDD will be available only to select customers that can mitigate peculiarities of SMR, the Ultrastar DC 550 hard drives will be available to all clients that are satisfied with their IOPS-per-TB performance and will have qualified them in their datacenters.

Western Digital will ship samples of its EAMR-based Ultrastar DC HC550 16 TB and 18 TB hard drives to clients late this year and plans to initiate their volume ramp in 2020. One additional thing to note about the 16 TB EAMR-enabled HDDs is that these drives will likely be used primarily for technology validation, as there are commercial 16 TB CMR+TDMR available today that do not need extensive tests by operators of datacenters.