Samsung to Invest $115 Billion in Foundry & Chip Businesses by 2030

Being among the largest contract makers of semiconductors and among leading developers of chips for various applications, Samsung Electronics wants to become the world’s leader in these industries. To do so, the company plans to invest a whopping KRW 133 trillion ($115 billion) in its Samsung LSI and Samsung Foundry businesses.

Samsung will invest $115 billion from now and through 2030, according to the approved plan for the next 12 years. KRW 73 trillion ($63.4 billion) will be invested in R&D in South Korea (which probably means chip R&D as well as process technologies R&D), whereas KRW 60 trillion ($52.1 billion) will be invested in production facilities and infrastructure used to make logic chips for various customers. On average, Samsung will invest roughly KRW 11 trillion ($9.51 billion) per year until the end of 2030.

Last year Samsung spent $15.2 billion on R&D in total, so the commitment to spend $5.28 billion every year on semiconductors-related R&D alone seems very significant. In the meantime, spending $4.3 billion on average on expansion of production capacities per year seems rather moderate. For example, Samsung’s production line in Hwaseong (campus pictured below), which was architected for the EUV equipment from the start and which is set to be completed in 2019, will cost the company $4.615 billion.

Samsung expects that its LSI and Foundry investment plan will create 15,000 additional jobs in R&D and chip production. To put the number into context, Samsung had around 320 thousand employees worldwide as of late 2017, so it is evident that the company is going to boost its workforce by 5% through late 2030 in semiconductor business alone. 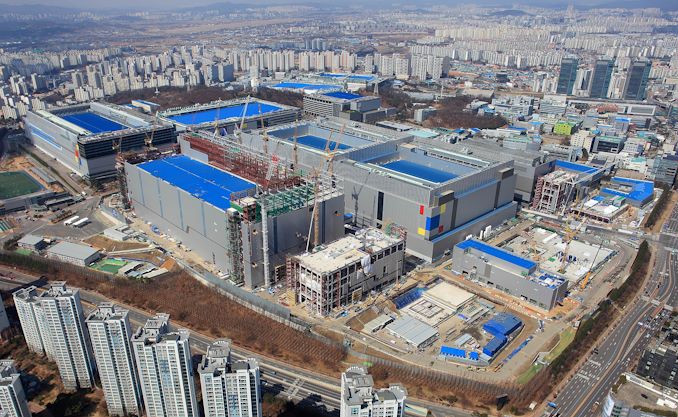