So what caused us to investigate the IBM POWER8 as a viable alternative to the mass market Xeon E5s and not simply the high-end quad (and higher) socket Xeon E7 parts? A lot. IBM sold its x86 server division to Lenovo. So there is only one true server processor left at IBM: the POWER family. But more importantly, the OpenPOWER fondation has a lot of momentum since its birth in 2013. IBM and the OpenPOWER Foundation Partners like Google, NVIDIA, and Mellanox are all committed to innovating around the POWER processor-based systems from the chip level up through the whole platform. The foundation has delivered some tangible results:

The impact of opening up firmware under the Apache v2 license and BMC (IBM calls it "field processor") code should not be underestimated. The big hyperscale companies - Google, Amazon, Microsoft, Facebook, Rackspace - want as much control over their software stack as they can. 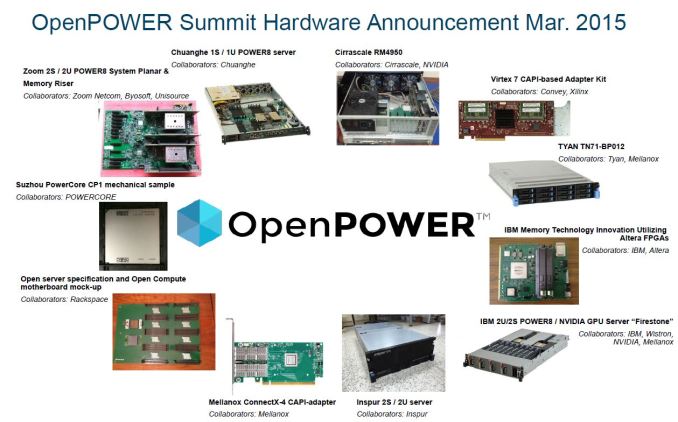 The resuls are that Google is supporting the efforts and Rackspace has even built their own OpenPOWER server called "Barreleye". While Google has been supportive and showing of proof of concepts, Rackspace is going all the way:

... and aim to put Barreleye in our datacenters for OpenStack services early next year.

The end result is that the complete POWER platform, once only available in expensive high end servers, can now be found inside affordable linux based servers, from IBM (S8xxL) and third parties like Tyan. The opinions of usual pundits range from "too little, too late" to "trouble for Intel". Should you check out a POWER8 based server before you order your next Xeon - Linux server? And why? We started with analyzing the available benchmarks carefully.