As Johan mentioned in our initial Haswell-EP coverage, Intel’s main competition is with itself. Some other server CPU manufacturers focus on particular hardware and software combinations, while AMD has not updated their server line in over 2 years. ARM is making some inroads into the low end or the highly parallel market, but for the majority of workstations or servers, Intel has the market. The only downside to this strategy is that Intel has to convince that upgrading is worth it. One way to implement this is infrequent updates, although the customers demand a certain level of consistency over time such that updates are not super frequent.

For our testing, it is worth noting that our CPU samples arrived at different times. Due to the testing setup at those times, certain benchmarks were unable to be run due to updates required. As a result, we have no power data or single GPU benchmarks for the E5-2650 v3.

We must thank the following companies for kindly providing hardware for our test bed:

Power consumption was tested on the system while in a single MSI GTX 770 Lightning GPU configuration with a wall meter connected to the OCZ 1250W power supply. This power supply is Gold rated, and as I am in the UK on a 230-240 V supply, leads to ~75% efficiency > 50W, and 90%+ efficiency at 250W, suitable for both idle and multi-GPU loading. This method of power reading allows us to compare the power management of the UEFI and the board to supply components with power under load, and includes typical PSU losses due to efficiency.

We take the power delta difference between idle and load as our tested value, giving an indication of the power increase from the CPU when placed under stress. 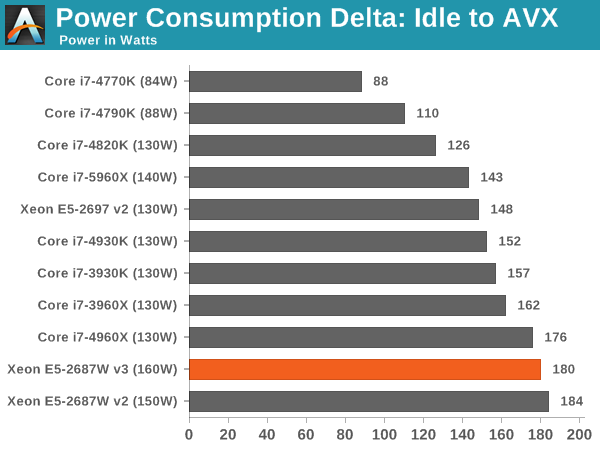 The E5-2687W v3 is listed at 160W, which aside from a pair of AMD CPUs is the highest TDP for a CPU we have seen. Nevertheless, there are certain efficiencies exploited in the new platform and the v3 version of this CPU has a lower power delta than the v2 does, even with the higher TDP. Unfortunately due to limitations we were unable to measure power consumption while we had the E5-2650 v3 in for testing.

As per Intel's Xeon policy, the E5-26xx v3 processors are multiplier locked. For competitive overclockers, this is rather frustrating given that the Xeon processor line are often the better selected dies that also can pack a punch. So while multiplier overclocking is not possible, for motherboards with overclocking oriented BIOS options we can adjust the BCLK. While we never published the data at the time, the Ivy Bridge-EP processors we had in to test were good for 113 MHz (+13%), although 110 MHz had a good balance of overclock and stability.

Moving up to 104 MHz is not a lot. It does afford some DRAM movement as well, but our system refused to POST at 105 MHz. This might purely be a result of the processor, so in our future Xeon reviews we will see if more movement is possible with other SKUs.