By now ASRock is a familiar household name for many enthusiasts, noted by generally decent product quality, budget-friendliness, and tendency to equip with innovative, if not interesting, features.  Of course this did not happen overnight, and in the past ASRock's offerings were rather known for experimental features that were rarely seen on other vendors’ products. Boards like 4CoreDual-SATA2/VSTA are prime examples of such endeavors, and these products enjoyed enormous popularity among forum enthusiasts.   Over time, ASRock’s efforts have expanded to cover wider market segments and lately much of the focus has shifted toward high-end offerings on various fronts.  Products like the X58 SuperComputer and X58 Extreme series are a testament of ASRock’s determination to reach the high echelon motherboard market.

With this short background today we’re taking a look at ASRock’s latest and ongoing attempt to tackle the high-end motherboard market: ASRock 890FX Deluxe 4.   In the past ASRock’s portfolio on the AMD platform pretty much remained in budget and mid-range sectors, largely based on IGP-based products.  ASRock attempts to rectify the situation with the 890FX Deluxe 4, a product squarely aimed at AMD enthusiasts and power users.   They even try to one-up the big players by giving more features, while maintaining a reputation of wallet-friendliness.   Whether (or to what extent) ASRock succeed, is what we’re going to find out today.    We are also going to take this opportunity for a short brush up of AMD’s Leo platform and a quick inquiry into Thuban’s performance relative IMC scaling. 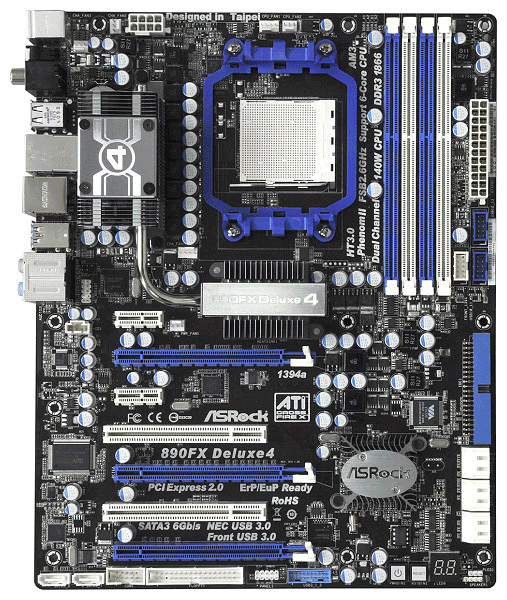 Board Summary and User Experience

Though It’s not apparent by looking at the the board’s PCB, from the board packaging we see ASRock is taking a page from ASUS and Gigabyte’s marketing manual and proudly boasting “True 3-3-3” design.  We are being hit heavy by this 3-3-3 slogan these days but it doesn’t mean we can always guess correctly what those 3s are, because they tend to differ per vendor.  In ASRocks dictionary, they apparently refer to USB 3.0, SATA 3, and eSATA 3.  The board itself looks quite similar to X58 Extreme 3, with nearly identical layout and color scheme.   There is no glaring fault in its layout other than the oddly-positioned auxiliary SATA ports at the bottom left corner (more on this later), and the nicely aligned all-solid caps leave the impression the board design was well-planned.

The board’s cooling is provided by two massive heatsinks covering mosfets and the north bridge.  The two heatsinks are connected via a heatpipe and additional cooling is provided in the form of an optional 50mm x 10mm fan, which can be swapped with the aluminum plate that covers the mosfet heatsink.   It is a rare sight to see a fan on a motherboard these days, but our experience with the fan was surprisingly pleasant.  It keeps the heatsinks cool without making obnoxious noise typical of a fan of this caliber.  The expansion slots are logically placed and overall we think ASRock did a fine job at designing the layout, both in form and in function. (Again, except for the auxiliary SATA ports)

The Deluxe 4’s performance was in line with ASUS M4A89GTD Pro/USB3 board we have recently reviewed, which was expected to a degree.   With memory controller residing in CPU die, there just aren’t many areas where individual board makers can distinguish themselves on performance front.   Nevertheless, we found the Deluxe 4 somewhat lacking compared to ASUS M4A89GTD Pro/USB3 in HTT overclocking and memory overclocking when mated with a Thuban CPU.  While those may not matter much for majority of users, extreme overclockers and those who want to tweak the system to the heart’s content might not look too kindly upon these limits.

The maximum attainable HTT using a 1090T CPU and 8GB of memory was 316 HTT with memory set to DDR3-1684/7-8-7-2T via the 3:8 divider, but the board refused to go into S3 sleep at this configuration.   Another caveat we noticed was the board’s strange “HTT Hole” right around 300 HTT, which is a rare phenomenon on the AMD platform.  The board would boot to up to 292 HTT normally, but it took multiple attempts to boot beyond that, eventually failing to boot at 300 HTT despite our best attempts.  The Deluxe 4 would then slowly regain confidence around 305 HTT, finally reaching its maximum 316 HTT.  The maximum HTT up to which S3 resume functioned normally was 290 HTT.  Memory overclocking was decent but not the best we have seen, the board preferring a 3:10 divider ratio over the 1:4 (3:12) divider.   This made it difficult, if not impossible to achieve the maximum memory overclock we had achieved on ASUS M4A89GTD Pro/USB3.  On the other hand, recovery from failed overclocking on the Deluxe 4 was one of the best we have seen, and we did not once need to clear CMOS during the course of overclocking .  As a matter of fact, we don’t even remember ever having to recycle the power – all it took was a couple of resets for the board to recover.

What concerns us more is the board’s tendency to overvolt the CPU-NB and memory. This is a concern for a long-term reliability, especially for the DIMM sticks specified to run at 1.65V or below.  When left auto or set manually 1.65V, the board will juice up the memory sticks with 1.70V.  This is an absolutely unnecessary move by ASRock, not just because it puts those DIMM sticks in risk without users’ knowledge but because many mainstream DDR3 sticks today are not very responsive to excessive voltages, overclocking-wise.  We will discuss this in detailed BIOS evaluation part of this review.