The GIGABYTE B360 Gaming 3 WIFI Review: A Cheaper Alternative at $120

The GIGABYTE B360 Gaming 3 WIFI isn't expected to turn heads on looks at this price point, yet it is also not always expected to be shoved inside a closed case either. To that end, the motherboard uses a dark brown, almost black PCB with brown traces running throughout the board. The now familiar AORUS bird is stenciled in prominently around the audio and PCIe area of the board. The power delivery heatsinks are silver in color with a brushed aluminum finish while the chipset heatsink is a black and silver combo.

At a high level, we see typical features here from the 8-pin power lead and a few fan headers up top, four DRAM slots, and six SATA ports to dual M.2 slots along with a slot for the included Intel CNVi Wi-Fi.  The top M.2 slot uses a fairly beefy cooler to keep the PCIe NVMe M.2 drives cool. All slots are in black with the primary full-length PCIe slot reinforced to help with heavy video cards. There is a plastic cover for the I/O area and in this case, does not extend down over the audio area as we have seen on other boards. 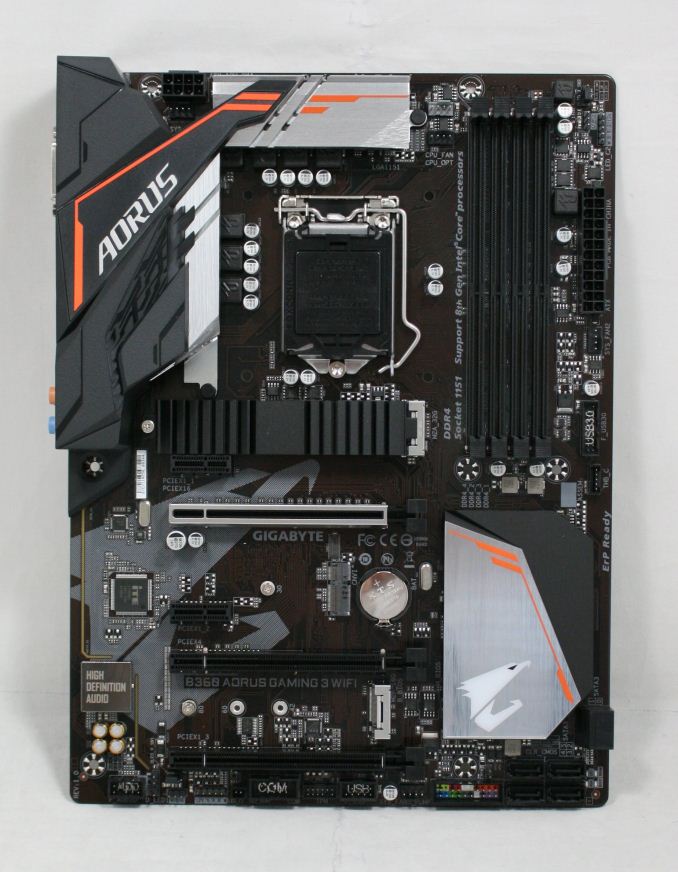 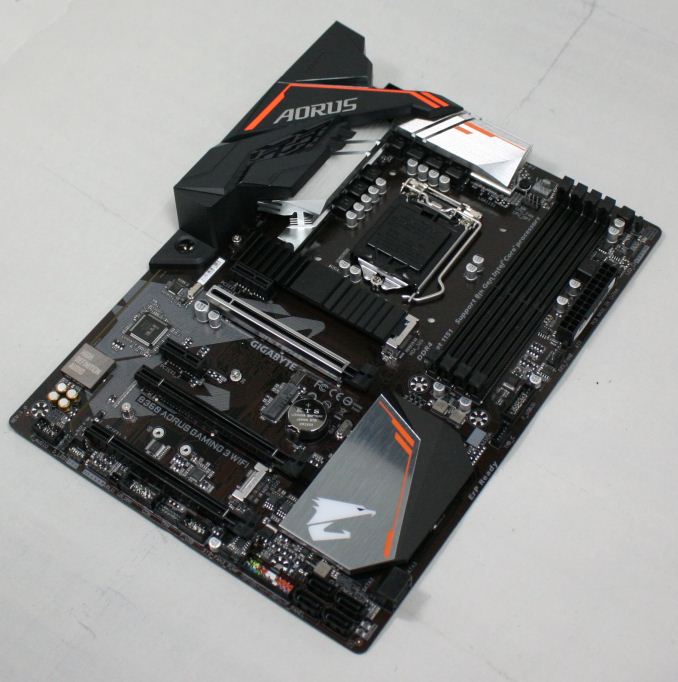 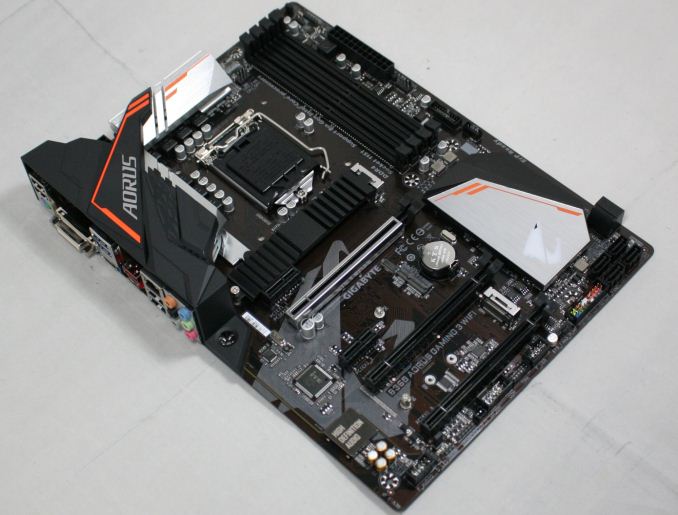 The B360 Gaming 3 WIFI does include RGB LED illumination. The LEDs are located under the PCH heatsink as well as several running along the bottom of the board lighting up the audio separation strip on the bottom left-hand corner. Along with the onboard lighting, there are a couple of RGB LED headers for additional lighting supporting standard 5050 RGB (RGBW) lighting with a power rating of up to 2A. Both the integrated and attached lights are controlled by the RGB Fusion software. 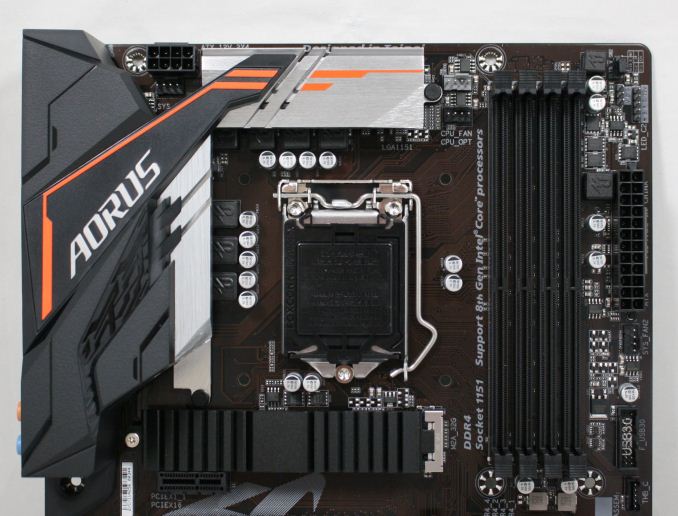 The board has a total of five 4-pin fan headers able to control the attached air mover through PWM and voltage methods. The two CPU headers and a system fan header are located up top flanking the heatsink on either side, with an additional system fan near the 24-pin ATX 12V connector. The last header (sysfan/pump) is located on the bottom left. There is not a mention if these headers are able to handle over the standard 1A output. All fans are controlled through the BIOS or through Easy Tune and the Smart Fan functionality. Also in view is the first M.2 slot that has the Thermal Guard heatsink on it. 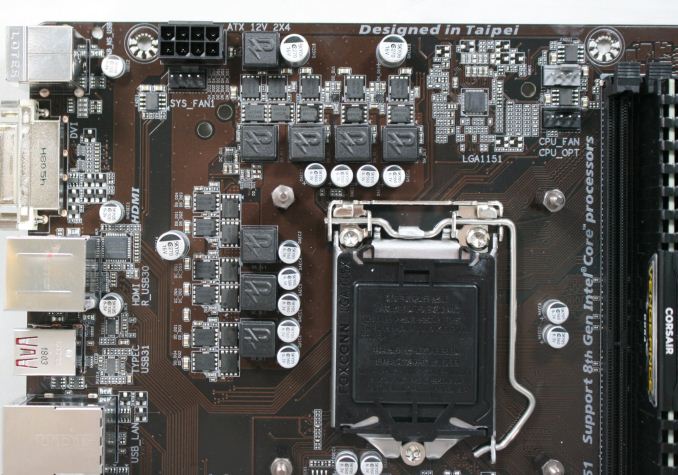 Looking at the top half of the board with the heatsinks removed, we see seven phases for power delivery for the board. The Intersil 95866 4+3 Multiphase PWM regulator controller manages the power sent to the On-Semiconductor MOSFETs. In this case, the B360 Gaming 3 WIFI uses 4C10N and 4C06N 'FETs to help deliver stable power to the CPU. Power is supplied to the VRMs through a single 8-pin EPS 12V connector. We didn't see any throttling during testing while using an i7-8700K.

The closer view of the right side of the board shows the six SATA ports on the far left, the PCH heatsink, a Thunderbolt 3 5-pin header,  a USB3.0 header, and a system fan header. Next to the 24-pin ATX 12V have RGB LED connections along with a voltage control jumper for the digital LED headers. 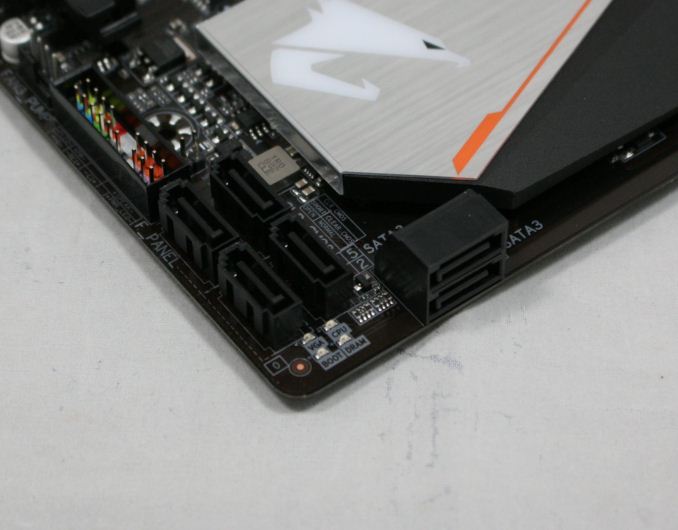 This picture shows the six SATA ports on the board as well as a view of the dummy boot LEDs. Note the top M.2 connector shares bandwidth with the SATA port 5 and the bottom M.2 connector shares with SATA port 3. When either is used in SATA mode, the corresponding SATA port will be unavailable. Also worth noting is the B360 chipset does not support RAID. 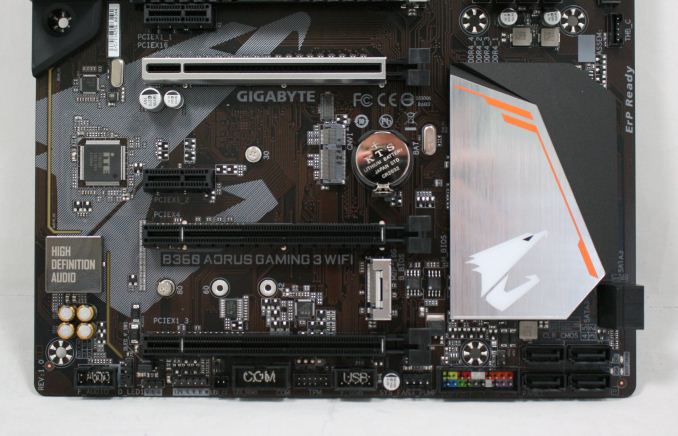 The bottom portion of the board holds is where we can see the Realtek ALC892 audio codec hidden under the EMI shields along with its Chemicon capacitors on the bottom left and the PCIe slots in the middle. The board includes three full-length slots with the top full-length slot being the only one CPU connected. The board does support Crossfire but not SLI due to the second slot only supporting a maximum of x4 mode. This slot also shares bandwidth with the two x1 slots. When these are populated, the second PCIe slot operates at x2 mode.

The back panel IO has a mix of USB 2.0 (4x ports), USB 3.0 (3x ports) and a USB 3.1 Type-A port which should be plenty for most users. As for video outputs, the B360 Gaming 3 WIFI offers DVI-D and HDMI outputs to use the integrated graphics. Last, is a six-plug audio stack, powered from the Realtek ALC892 codec. 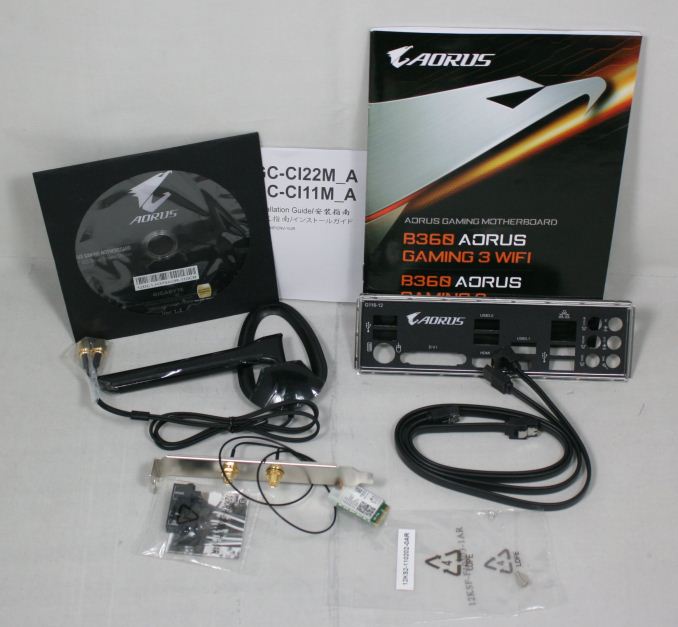