The first set of keyboards we look at today is at the higher end of the pricing spectrum. The Logitech K830 and TK820 both come in at $99.99. The justification offered for the K830 is the presence of an internal rechargeable battery as well as backlighting for use in the dark. The TK820 (primarily meant for AiO systems) comes with a bigger than usual touchpad and support for a large number of gestures. We will first look into the K830 in detail, followed by the TK820. 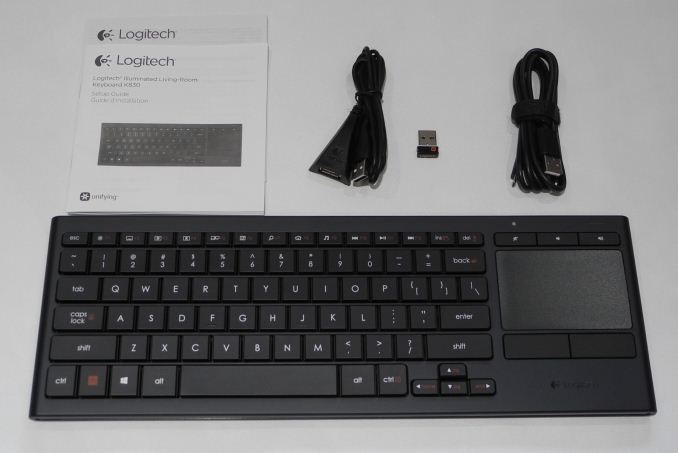 The external aspects of the Logitech K830 are summarized in the table below. The dimensions are similar to the Logitech K400 - any user comfortable with that keyboard will feel right at home with the K830 also. Due to the internal rechargeable battery, the unit is heavier compared to similar touchpad keyboards. Subjectively, the weight makes the unit feel solid in hand without being too cumbersome to carry around. The keyboard uses the Logitech Unifying Receiver that enables the receiver to communicate with up to five other compatible Logitech wireless equipment. In order to alleviate range issues, a USB extender cable is also supplied.

The gallery below takes the reader around the various features in the keyboard chassis. There is an explicit on/off switch to conserve power. A micro-USB port enables the internal battery to be recharged using the USB port of any PC. A USB to micro-USB charging cable is bundled along with the unit.

Moving on to the keyboard layout, we find the function keys multiplexed with some shortcut keys (for multimedia operations as well as day-to-day Windows operations) using an orange Fn key. Unfortunately, the default behavior is of the Fn key being inactive (i.e, pressing the function keys activates the shortcut multimedia / Windows op, rather than the corresponding function key behavior). The other keys are in the expected areas, with only the half-height function keys representing a stumbling block for users accustomed to full-size keyboards.

In terms of ergonomics, the keyboard is suitable for both single-handed operation as well as holding with both hands. The latter scenario is helped by the presence of a left click button on the left side of the top edge of the keyboard. The half-height arrow keys and the positioning relative to the Return key require some adjustment while typing for extended durations. In addition, the keys are placed a little bit closer together compared to traditional keyboards (to facilitate the smaller size), and this makes touch-typing a bit of a challenge. The back of the keyboard is also flat, and doesn't allow angle adjustment for a bettery typing setup - This could be addressed somewhat, but we can see where Logitech is positioning this device, and why that is not amongst the set of features that they would want to add to the unit.

The build quality of the unit is top-notch, befitting that of a keyboard priced close to $100. Despite being made of plastic like the K400, it does look and feel more durable, and it can definitely take more abuse compared to the flimsy K400 while retaining its appearance. However, one of the issues that we observed in extended use was the fact that the keyboard material tended to be more susceptible to oily smudges compared to the K400. This takes the sheen off the unit after a few months.

The membrane keys are expected in a unit at this price and targeting the HTPC market niche. The unit is also thicker than comparable alternatives, but that again contributes to a solid feel (and hopefully, better durability).

The K830 has a MSRP of $99, but can be found for as low as $85 on sale. The availability of adjustable backlight as well as an internal rechargeable battery makes for a unique set of features - and this enables Logitech to demand the premium for the unit. The internal battery is Li-ion, and the recharge interval depends on the usage scenario. Logitech claims 20 hours of usage between recharges with the backlight on. The explicit on-off switch is quite helpful, but it would be nice to have one for the backlight also. The organge keys can be customized further with the help of Logitech's SetPoint / Logitech Options software, but we were able to use it without the softwares and had no issues for day-to-day HTPC usage. The touchpad also supports Windows 8 gestures such as swipe from right for the Charms bar and swipe from left to switch applications (without the need to install the SetPoint / Options software).

The external aspects of the Logitech TK820 are summarized in the table below. Compared to the K830, the keyboard is both wider, taller and heavier. The device targets All-in-Ones (AiOs) and that reflects in the keyboard's design. The four AA batteries are accommodated in the blulging area at the top of the unit. Like the K830, the TK820 also uses the Logitech Unifying Receiver.

The various external features of the TK820 are brought out in the gallery below. There is an explicit on/off switch right above the 'Backspace' key. This helps in power conservation as well as avoiding accidental keyboard / touchpad activation.

Moving on to the keyboard layout, we find that the keys are spread apart compared to the K830. This enables users accustomed to full-sized keyboards to feel right at home with the arrangement as far as rapid typing is concerned. Since the AiOs are the target market, this is well and good. Unfortunately, the two main issues we had with the K830 get transferred here also. Similar to the orange 'Fn' keys in the K830, we have blue 'Fn' keys in the TK820, and the default behavior is that of the non-traditional shortcut keys being active in the F1-F12 row. Also, the arrow keys are half-height, making interaction challenging for extended typing durations. Logitech's SetPoint software needs to be installed in order to change the behavior of the blue 'Fn' keys - this really needs to be fixed to keep the default behavior to be the traditional one. The lack of dedicated Pg Up / Pg Dn / Home / End keys may be excused in a HTPC keyboard, but, for an AiO, it would be nice to have them back.

In terms of ergonomics, the TK820 is way ahead of the K830. The bulging area at the top allows for a slight natural angle for extended typing scenarios. The keys are also spaced well apart. However, it ends up with the same score as that of the K830 for a few reasons. The half-height arrow keys and the multiplexed special function keys make the typist resort to unfamiliar keystroke combinations. However, the major issue is the touchpad. The sensitivity of the touchpad is quite strange - It often recognizes fingers gliding over the surface as 'press and drag' to select parts of the screen contents. Even though the touchpad area offers left click with a  single press in the bottom left corner and a right click with a single press in the bottom right corner, there are other gesture options for a right click (using two fingers) that might affect users not accustomed to them. Balancing these issues is the fact that multi-finger gestures work great on the keyboard without even having to install the software, and the tactile feedback on the keys is great.

The build quality of the unit is acceptable, comparable to that of the K830. Given that they target the same price point, this is expected. The membrane keys in the keyboard are also not a surprise. However, given the target market - extended typing with AiOs, the unit could have come with a more sturdy and rigid frame using metal instead of plastic. However, for HTPC usage, the build quality is more than acceptable - making us rate it higher than the K830.

The TK820 has a MSRP of $99, but can be found for as low as $59 on sale. Other than the internal rechargeable battery and the backlight, other aspects mentioned about the K830 are applicable here also. The large touchpad area, mechanical click support and the large number of supported gestures serve as advantages for the unit. However, the touchpad behavior needs to be more consistent for the keyboard to be of good value for its price.