Today we’re covering a quite unusual device announcement a little unlike what we’ve seen before. ASUS and Qualcomm – well, mostly ASUS, are announcing a new device called the “Smartphone for Snapdragon Insiders” – yes that’s the actual name of the phone. The phone follows Qualcomm’s social media initiative called “Snapdragon Insiders” where the company is has opened up more community channels on various social media platforms to closer interaction with Snapdragon fans, attempting to build a closer relationship with its users.

The “Smartphone for Snapdragon Insiders”, or let’s just call it the SSI from here on, is a product of the collaboration between Qualcomm and ASUS – though here things become a bit complex and unintuitive, as Qualcomm strictly refers to the SSI as being a product strictly designed and made by ASUS. It’s a weird kind of relationship and marketing exercise that can maybe seen more as a Snapdragon branded phone by ASUS.

Starting off with the internals of the phone, there’s a large sense of familiarity with the specifications, dimensions, and just overall design of the phone that comes from the juxtaposition between ASUS’s ROG Phone 5 and the SSI. Both phones have similar form-factors, similarly internal components and somewhat similar external designs, and even within Qualcomm’s presentation slides during our pre-briefing, showcasing an internal layout design that’s eerily similar to the ROG Phone 5. 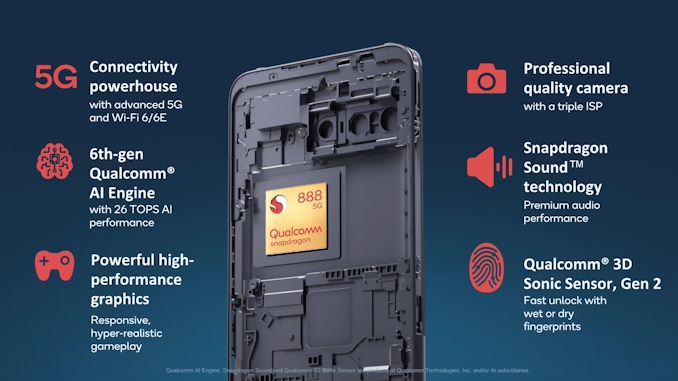 Both phones are powered by the Snapdragon 888 – it’s actually a bit surprising that the newer SSI doesn’t come with the recently announced Snapdragon 888+, but this was explained to us that the SSI design was already well underway and in design before the 888+ would be available.

Given what appears to be the same chassis and thermal design between the ROG 5 and the SSI – one could assume that the general performance of both phones to be extremely similar to each other.

The SSI does more notably differentiate itself in terms of RAM and storage – well at least compared to the regular ROG 5, as it only comes with a large 16GB LPDDR5 and 512GB UFS 3.1 storage capacity option, which is more in line with the premium ROG Phone 5 Ultimate that sees lower availability. 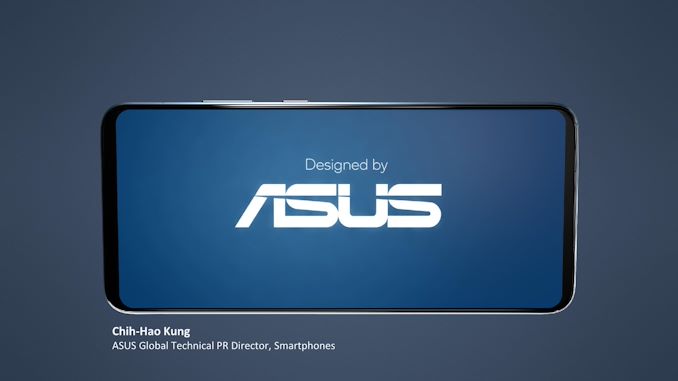 The display of the phone is essentially identical to that of the ROG Phone 5 – a 6.78” 2448 x 1080 AMOLED panel from Samsung that is able to run up to 144Hz refresh rate. We hadn’t exactly confirmed if the touch sample rate is the same 300Hz as on the ROG 5, however given that the specification sheet on the phone we got from Qualcomm had the display section essentially copy-paste from ASUS’ own ROG 5 press release contents, I would assume this to be the case. 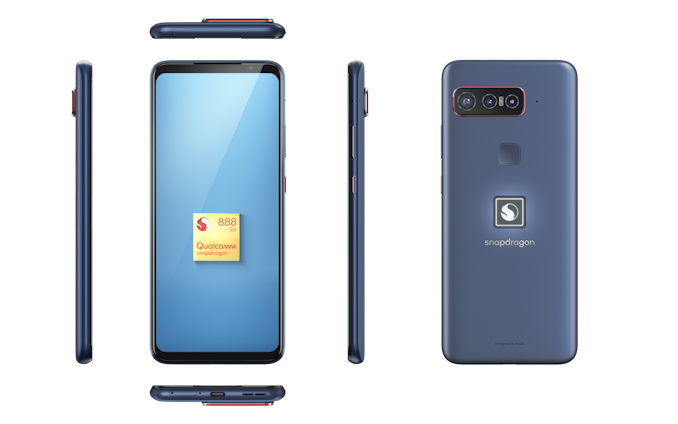 Design wise, the SSI is very similar to the ROG 5, however it’s ever so slightly downsized. The fundamental form is still there, but the one big change is that the SSI is 0.35mm thinner and 29g lighter. This doesn’t sound like too much, but it has a huge impact on the battery capacity which has shrunk 33% down from 6000mAh on the ROG Phone 5 to 4000mAh here on the SSI. It still features the same 65W USB-PD 3.0 (“QC 5.0”) charging capabilities.

Another large physical change is that the phone has a rear fingerprint sensor, which is a bit weird as the ROG 5 had an under-screen unit. This rear sensor is actually Qualcomm’s 2nd gen sonic sensor, but the issue is that these kinds of sensors are only able to be integrated into flexible OLED panels, and the phone here uses a solid glass substrate variant. This actually begs the question of what the point is to have a sonic sensor at all if it’s not integrated into the screen, as it diminishes the advantages over a traditional capacitive unit.

Below the fingerprint reader, we see an illuminated Snapdragon logo instead of the ROG logo. This can also be configured to light up or pulse in a rhythm, or simply turned off.

On the bottom of the phone there’s more design changes over the ROG 5 – the dual nano-SIM moves from the very bottom left side of the phone to the left bottom side, next to the USB-C connector. What’s very odd here is that the 3.5mm jack has disappeared, and the bottom speaker is no longer front-facing, but bottom facing.

Qualcomm sent us along with the press materials an extract of DXOMark Audio review of the SSI, and even though the phone is supposed to be a showcase of a “Snapdragon Sound” experience, it literally performed worse than the ROG 5 in every speaker audio playback measurement test. 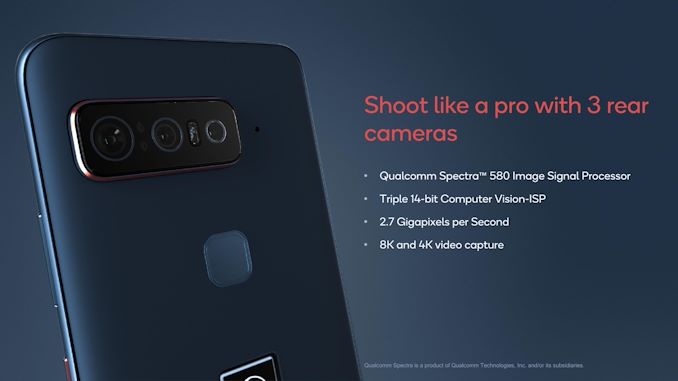 The camera setup is also quite similar to ASUS’ phones. On the main unit, we find the 64MP IMX686 with an f/1.8 lens with OIS. The OIS here is different to the ROG 5, but otherwise appears to be the same camera module. The ultra-wide angle appears to be identical with an IMX363 and f/2.2 optics with 14.3mm equivalent focal length.

Instead of a 5MP macro, the SSI does feature the 3x optical zoom / 80mm equivalent 8MP telephoto module as the third camera, with f/2.4 optics and OIS.

The really large issue I have with the camera setup is that even though this would have been an opportunity for Qualcomm to showcase their own expertise with their own SoC’s camera pipeline, there was very little mention in regards to who exactly is responsible for the software. Qualcomm reiterated that this is an ASUS product, and ASUS’ representatives just noted that the phone features “stock Android” – and it’s unclear exactly what kind of ASUS features or aspects such as camera processing will be integrated into the device. 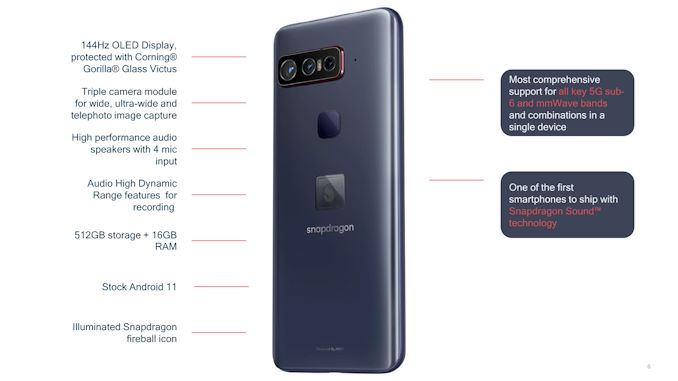 The one feature that does really distinguish the Smartphone for Snapdragon Insiders is its network and cellular connectivity. The big advantage over the ROG Phone 5 is the fact that this is a mmWave device, with Qualcomm claiming that it is the device with the most comprehensive support for all global frequency bands, making it a truly universal phone in that regard.

This fact is actually quite unusual as it means that the phone has extensive internal RF front-end and antenna designs, and could somewhat explain where a lot of the internal device space went, given the smaller batteries compared to the ROG 5. 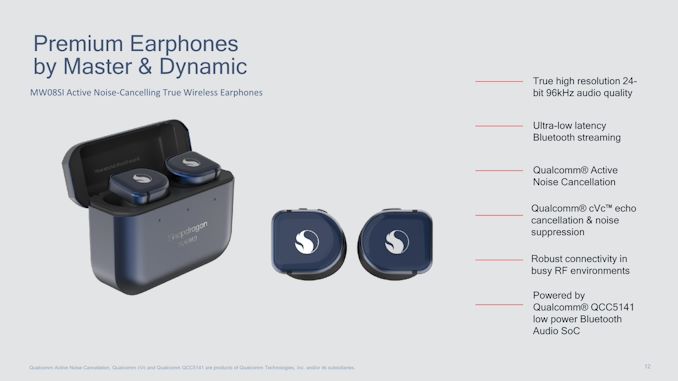 Finally, the accessory that comes with every SSI is a pair of Master & Dynamic Snapdragon branded wireless earbuds that in combination with the SSI, represent the first “Snapdragon Sound” experience. Snapdragon sound here in general refers to a plethora of software audio stacks and audio components that allow for higher bitrate and lower latency audio experiences for wireless audio devices. These appear to just be re-branded variants of Master & Dynamic’s MW08, which got average reviews and come at an MSRP of $299. 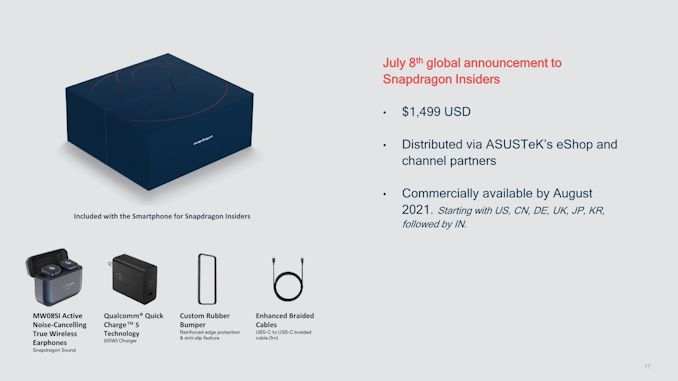 In the end, we come to the price. At $1499 USD, the Smartphone for Snapdragon Insiders is a pretty unattractive value proposition. Even accounting for the fact that you’re getting $299 earphones included into the package, that leaves you with a device price of $1200, and for that price, beyond the added mmWave capability and telephoto module, you get very little added value compared to a ROG Phone 5 – if anything, you’re losing out features such as a 50% larger battery, better front-facing speaker setups, 3.5mm headphone jack and the gaming accessory ecosystem that the ROG Phone 5 allows for.

Beyond that, again, ignoring the $299 value earphones in the package, the device literally is destroyed in feature-set and speculations by the likes of a Galaxy S21 Ultra, which is now available for $999 in the 256GB variant.

The phone is just a weird combination of specifications – losing out on the very features that made the ROG Phone 5 really distinguish itself from other phones, and appears to me to present itself as nothing more than just a marketing exercise to push the Snapdragon Insiders “brand”. The very few positives of the design, such as the extensive cellular compatibility of the device, don’t make up for just the rather absurd and pointless package of features the phone presents itself as.

The Smartphone for Snapdradon Insiders will be available in August in ASUS’ eShop in select countries.