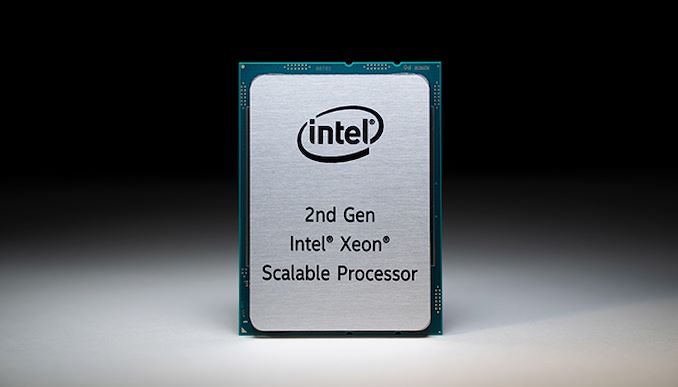 While this year’s official Mobile World Congress event may have been canceled, a number of vendors are still going ahead with their previously scheduled product announcements and launches. Among them is Intel, who decided to use the time to announce a major expansion/realignment of their second-generation Xeon Scalable processors. With 18 new CPUs ranging from $306 to $3950, Intel is undertaking a significant shift in their Xeon Gold, Silver, and Bronze lineups, claiming to lift performance, but also rather obviously cutting prices.

Coming into 2020, Intel’s server saga continues to be an odd one, even by the sometimes wild fluctuations of the tech industry. In terms of sales, Intel has seen tremendous success with their data center product portfolio, growing revenue by 19% in a capacity constrained environment. Intel still can’t make enough 14nm chips – server processors included – to fully meet market demands, which is a very profitable problem to have.

However, Intel’s technology situation doesn’t reflect their sales situation: rival AMD’s second-generation EPYC processors have Intel beat in almost every metric, offering better performance and greater energy efficiency, all at lower prices. AMD has been able to offer more cores than Intel both on an absolute basis and per-dollar, giving AMD the stronger hand. The silver lining for Intel, at least, is that they are able to thrive on sheer momentum, as enterprise IT decisions are made on the scale of years. But there’s no escaping the fact that AMD’s EPYC processors are going to continue to chip away at Intel’s Xeon market share. Intel has to respond to AMD. 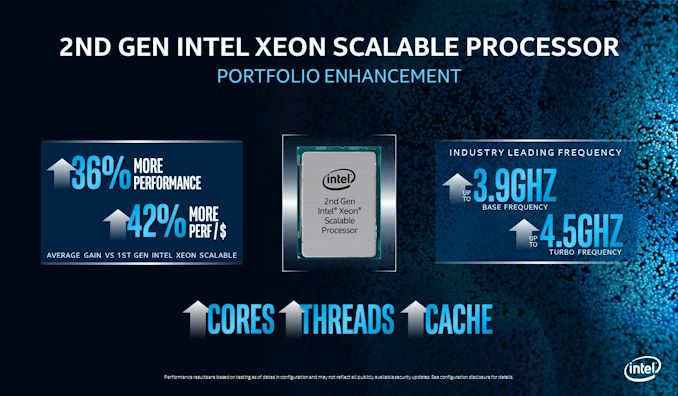 To that end, today Intel is launching 18 new “performance- and performance-per-dollar-optimized” Xeon Scalable processors. Based on the same Cascade Lake silicon as Intel's existing parts, the updated CPUs cover the Gold, Silver, and Bronze tiers (there are no new Platinum chips). The updated SKUs are set to deliver sizable performance bumps, effectively replacing some of the already available Xeon Scalable SKUs.

Depending on the specific SKU, Intel is offering more cores, higher clockspeeds, or more cache than earlier chips – and often, all three at once. Ultimately, depending on if you view the glass as half-full or half-empty, Intel is either boosting Xeon Scalable performance by upwards of 33%, or cutting prices by even more (50-60%+ in some cases). But either way, it’s a big change for the Xeon family.

Officially, Intel is focused on comparing the new SKUs to the first-generation Skylake-SP based Xeon Scalables, where they are touting an average performance gain of 36% for a total increase in perf-per-dollar of 42%. This is a little bit of a misnomer, as these new SKUs aren’t a new generation in and of itself, and Intel has already publicised the 1st Gen to 2nd Gen benefits at the 2nd gen launch.

As far as Intel is concerned, these are all still part of the second-generation family. And while we’ve seen the name “Cascade Lake Refresh” unofficially thrown about, Intel didn't use this name in our briefings, at least as far as their official press releases and other communiques are concerned, however most of the new parts have the letter 'R' to designate them from the rest.

For their refreshed chips, most of these chips are getting the R suffix, indicating it’s a faster refresh chip. Intel is also introducing a single socket U series chip, and a single high temperature T series chip.

Intel is also introducing a pair of non-suffixed high frequency chips: the Gold 6250 and Gold 6256. With 8 and 12 cores respectively, both of these chips are rated to turbo up to 4.5 GHz, which is 100MHz higher than Intel’s best existing Xeon, and 400 MHz higher than anything else being introduced today. These parts are being specifically flogged at customers who need maximum performance in single/lightly-threaded workloads, and represent one of the few remaining technological edges that Intel has over AMD’s EPYC chips. We might have heard rumors that some of the big hyperscalers love these chips, as they fit their needs combining performance and TCO.

Officially, Intel hasn’t cut prices on anything. The new chips come in at the same price as their direct predecessor; for example the new Gold 6242R has a list price of $2,529, the same price as the existing Gold 6242. However as I mentioned before, with Intel increasing core counts and clockspeeds across the board, if you look at things from a fixed performance perspective, then the new SKUs are a de-facto price cut. Otherwise, for the same price you’re now getting more cores, more cycles, and more cache for the price.

In fact, the cache may be the most interesting but least visible part of this change. Whereas many of the existing Xeon Gold parts only ship with 25 to 30 MB of L3 cache – consistent with their core counts – a significant number of the new parts ship with well over 30 MB of cache. So along with the raw core counts and clockspeed changes, the larger cache will be helping Intel to boost its overall performance and competitive positioning.

Otherwise, left out in all of this is Intel’s Xeon Platinum line of chips, which remain unchanged. The Platinum chips remain the only way to get a Xeon that’s capable of running in an 8 socket configuration, but the new Xeon Gold SKUs put a lot of pressure on those chips. With Intel offering up to 28 cores and 38.5 MB of L3 cache on a Xeon Gold now, the Platinum chips don’t have the same advantage they once did. So the net result is that unless you need the extra sockets, chips like the Gold 6258R are offering everything that the Platinum 8280 offers at 39% of the price. Unofficial price cuts indeed!

Alternatively, if we compare the Xeon Gold 6252 to the Xeon Gold 6230R, these two chips have the same core count and base frequency, but the 6230R is about half the price. The 28-core Xeon Platinum 8276, compared to the 28-core 6238R, has the same base frequency and cache size, but the price is $8719 to $2612, which is a 70% price differential. That's a lot cheaper if you do not specifically need 8-socket support offered by the Platinum.

Also interesting is that Intel has cut MP socket support on the new CPUs. These new CPUs only support dual socket operation, making the Xeon Gold series a complicated mess of 4-socket box, 4-socket all-to-all, 2-socket 2-UPI and 2-socket 3-UPI MP configurations. There have been some suggestions that Intel wants to regress back to the E5 (2-socket) and E7 (4 and 8-socket) product segmentation but in the new naming scheme, but this just makes it all the more complicated for no obvious reason.

Wrapping things up, the new chips are set to be available today. Intel’s press release specifically focuses on OEMs/ODMs, so it’s not clear when any of these chips will show up on the open market. But if the manufacturers already have them, then for those chips that are available far and wide (i.e. not going to a handful of vendors like Facebook), then we should expect to see them soon,