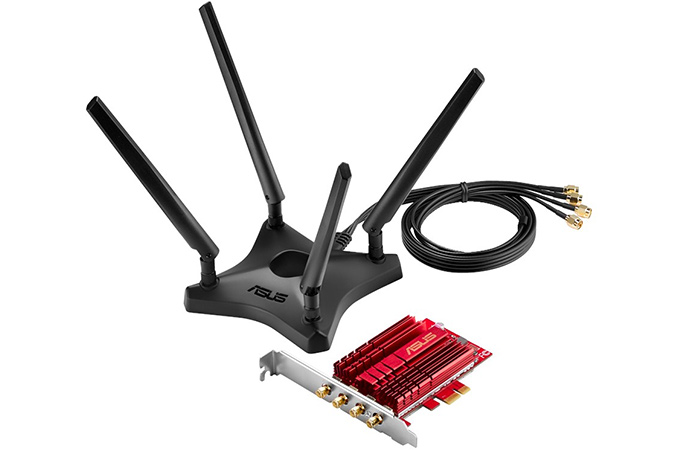 ASUS has introduced its flagship dual-band AC3100 wireless PCIe x1 adapter with four antennas and a maximum supported throughput of 2167 Mbps (270 MB/s). The card is powered by Broadcom’s flagship 802.11ac Wave 2 system-on-chip for Wi-Fi adapters and to show its best, it has to be connected to a router featuring another high-end Broadcom SoC.

The ASUS dual-band AC3100 wireless (PCE-AC88) PCIe adapter is based on the Broadcom BCM4366 SoC introduced early last year. The BCM4366 supports 4x4 802.11ac MU-MIMO technology and can thus use four 802.11n (2.4 GHz/5 GHz) or four 802.11ac (5 GHz) streams. The PCE-AC88 is a small half-height card that features PCIe x1 interface (the Broadcom chip supports PCIe 3.0, but exact data rate of the card is not given) and is equipped with a large big red cooler, and it is particularly large compared to other WiFi heatsinks. The device features four RP-SMA connectors for antennas as well as a special external magnetic base for the antennas which may be installed on top of a desktop PC or positioned somewhere else for better radio performance. 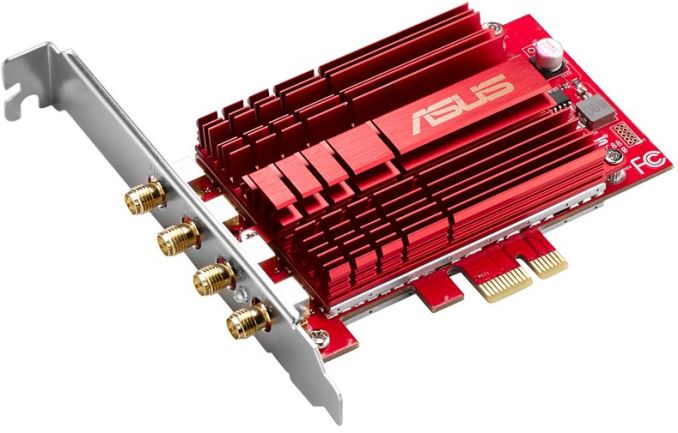 The ASUS PCE-AC88 card was approved by the FCC in late November 2015, and is currently listed on ASUS’ website. The product is ready and may emerge for sale anytime, but its price is still unknown. Keeping in mind that the ASUS PCE-AC68 costs around $95, we expect the newest and fastest one to be at a higher price.

At present, the ASUS dual-band AC3100 wireless (PCE-AC88) PCIe adapter seems to be the only add-in Wi-Fi card for desktops which supports speeds up to 2167 Mbps using a 4x4 SoC. The part should come in handy for various media center PCs or NAS environments where wired Ethernet is absent but can benefit from high network speeds.